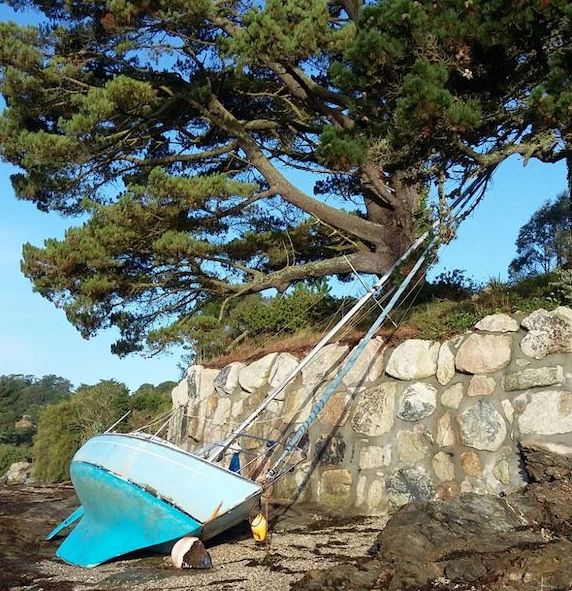 For some of the team, making it back to the relative safety and sturdy walls of the office is enough to be happy about with the weather that rolled through on Saturday. For reference check out the boat pic below.

Friday Night – Whilst not strictly on Friday, we couldn’t help but include the colossal tomahawk steak which Mike was treated to whilst being hosted in London last week. By way of payment he returned the favour on Friday night, taking guests to the fabled Verdant Brewing Co. taproom. The boys have got an incredible new mural along the wall and are now brewing on the new kit!

Other Friday activities saw Tom sleeping in sheds again, a habit which has come under much critique from those who haven’t tried it for themselves, but it continues none the less.

Saturday – A large group of Peloton associates found themselves brunching at the gorgeous Potager nursery and garden cafe. The perfect veggie breakfast antidote to a slightly overcooked Friday evening for some.

In contrast to a relaxed start, Mike and Emm kicked off the day with session 3 of their new 6 week hypertrophy program with the boys at Fitness Wild, pumping iron to get the blood going on a chilly morning. Ben (the Centurion) was out for his first match for Fal RFC since getting married. With squad numbers tight, a full game followed testing that post wedding fitness, but there was never any doubt that they would grind out the necessary win at 16 – 12. Unfortunately our in-house hockey maestro Hannah couldn’t quite keep a clean sheet, and suffered at the hands of the competition with a depleted team.

Slow afternoons followed in preparation for a myriad of events in the evening. We had the Trew family venturing to Malpas Village hall for a Cornish evening. Despite a slight age bias there was much merriment and scoffing of various baked goods. Tom and Nic headed to Godrevy for what was promised as a sunset 10K run, the last in the Freedom Racing Summer Series. Contrary to the picture below the evening soon turned sour on a biblical level, with lashing rain and wind sweeping across the bay. Fortunately the smiles and laughter only increased and the experience is all that mattered.

There was a good group then congregating in The Working Boat to celebrate Rachel’s Birthday, with great conversation carrying through till late.

Sunday – The calm after the storm. Cath discovered a stranded boat on her early dog walk over near the Pandora, owner unknown fingers crossed the damage was minimal.

Chris (saved your life) Flanigan our 2nd newest recruit spent the day soaking up some rays whilst helping out with the fantastic work of The Wave Project up at Fistral, a post session swim was mandatory for the volunteers involved. Hannah, switched sports for the day and unfortunately had an abrupt introduction to the world of local football leagues, hamstring problems spoiling play and the scoreline not going there way. Watch this space though, it’s all going to change.

Just down the coastline at Polly Joke bay the Rowe / Young family were foraging their way through the undergrowth for seasonal fair such as blackberries and sloes. Breaking through onto the sand they also caught up on some sunshine with the Cornish cherub Stan starting his blossoming modelling career.

Sandy toes and windswept faces slowly wound their way home for a quiet night. The Aga at Mike’s was filled to the gunnels with lamb and every roast accompaniment imaginable. It made for a wonderfully wintery feel, with home grown / made apple and blackberry tart supplied by the Thwaites household to finish. Sleepy eyes and full bellies turned in for much needed rest before welcoming in the week ahead.