I’ve been tasked with writing a note about what impact Brexit could have on dentistry.

To be honest it sent me into a flat spin. We don’t have a cupboard under the stairs but we do have a huge airing cupboard that is both dark and warm and whenever I think of Brexit that’s where I want to go…. What an utter and complete clusterduck. Someone really ought to go and find David Cameron (also hiding in his airing cupboard no doubt, and has been for the last two years) drag him out and charge him with treason. Send him to the Tower. Forever. Can you think of one single action taken by a politician in this country that has created more damage? Frankly, letting off an atomic bomb, in fact, several atomic bombs would probably do less damage. Let’s face it, what Cameron has done makes Jeremy Thorpe look like a nice bloke. Guy Fawkes a national hero!

However, I also subscribe to a maxim that says ‘if you change the way you look at things, the things you look at change’ and that has to be the case here, don’t you think? The point is no one really knows what will happen when we leave Brexit, whether it will be hard this or soft that and what difference that will make, we cannot be certain. Some things might change, some might not. Some might change by a massive amount, some a tiny bit. Some might change forever, some for a couple of months. No one knows. It’s simply the unknown.

So when I was asked to write about it I thought brilliant, that won’t take long. Don’t know. End of. Can I go home now?

But in reality, there is so much more to it than that. I like to study the principles of great conquerors (namely Alexander the Great, Julius Caesar and Genghis Khan) who did the most incredible things in terms of conquering the known and unknown World. I mean thank God the Daily Mail didn’t exist at the time of Genghis Khan. You can begin to imagine the headlines. Unknown Mongolian annihilates millions throughout China, Persia and parts of Russia. The whole of Europe by Xmas? Shop early to avoid panic buying….

But the point here is that they all shared one thing in common. They never shot from the hip. Never acted on a whim, Never waited to ‘see what happened. Never stood around moaning ‘how on earth do you expect me to take a hundred thousand Roman soldiers over the Alps and then march all the way across Europe, fighting a million Gauls on the way, and still have men left to invade Britain Bugger that, I’m just going to curl up and die.’ No, they all took control.

They made plans. They trained. They prepared. Genghis Khan had never even been to China for a holiday before he built a massive army (still only tiny against the mass of the Chinese) and conquered the Country; 10 times its size, 50 times as many people with a very sophisticated army.

And this reminds me of another expression I often use – ‘there are 2 ways of building the biggest building in town – go out and knock every other building down, or simply build the biggest.

So finally, returning to the original question ‘what does Brexit mean for dentists?’ – well, God only knows, but whilst the politicians argue, negotiate, bargain and worry what the outcome might be, get ready for whatever may come your way. Build your army around you. Make your plan, train your people to be the very best they can. Become a conqueror, make a massive plan and go out there being the best version that you possibly can be and ready for anything that may come your way. But whatever you do, take your business seriously, make it robust and prepared and whatever comes your way you will succeed. 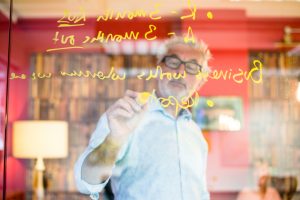